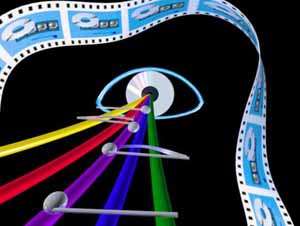 The box cover art for MMPM/2 embodies a unique approach toward product visualization and marketing. It achieves consistency and familiarity by effectively capturing buyer attention as well as conveying sufficient information about the product. The artwork incites further interest by utilizing state-of-the-art three-dimensional graphics technology, a concise design, and a visual representation of the product’s functionality.

Digital audio support is depicted as a sine-like wave, which is transformed into the curved, rainbow-colored music staff that moves the viewer into the picture. MIDI is represented in its icon form by musical notes resting appropriately on the music staff. CD-DA, CD-ROM/XA, and videodisc support are represented by their medium, the disc.

The disc alludes to the audio aspect of multimedia by being the focal point for the musical notes and bars. Additionally, it represents the video portion and videodisc technology by being the iris of an eye. The video conceptualization is further realized by a filmstrip winding through the image whose individual frames depict the MMPM/2 logo, which appears in the product as the desktop folder icon and in the installation progress indicator.

I composed the image through a series of sketches that were created and rendered using a three-dimensional graphics package called WavefrontTM running on an IBM RISC System/6000TM workstation.